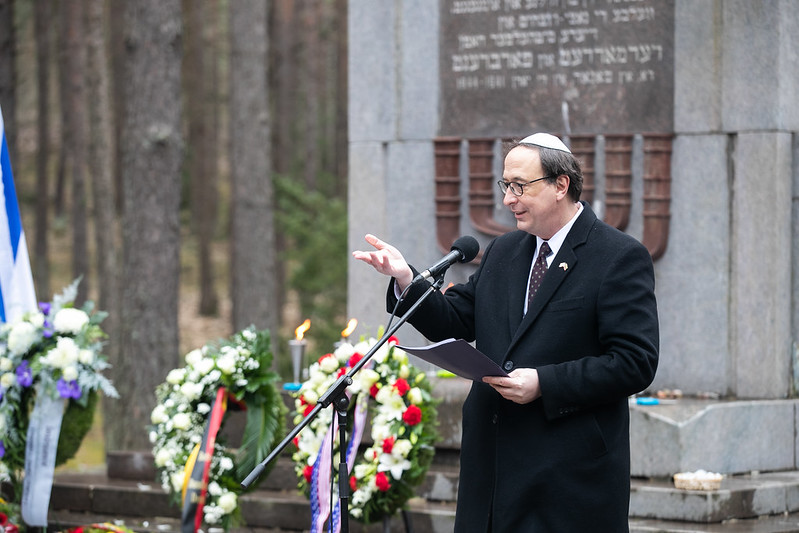 Ambassador Gilchrist joined the Jewish Community of Lithuania, leaders of Lithuania, and members of the diplomatic community at Paneriai Memorial to mark Yom HaShoah – the Day of Remembrance.  Six million Jews were murdered during the Holocaust. Today we remember those lives, honor their memory, and reaffirm:  we will never forget.

Speaker Čmilyte-Nielsen, Minister Landsbergis, Chairwoman Kukliansky, distinguished guests and friends:  It is an honor to gather with you to commemorate Yom HaShoah.

This memorial is a somber reminder of those who were systemically murdered during the Holocaust.   Six million Jews were murdered by the Nazis and their collaborators, including more than 95% of Lithuania’s Jewish community.  Today we  remember those lives, honor their memory, and reaffirm:  we will never forget.

The magnitude of human suffering is difficult to fully measure.  Each of the hundreds of thousands of Jews who were murdered in Lithuania at sites such as Paneriai were part of the fabric of Lithuanian society.

Each of us here today understands the importance and the meaning of this heritage, even if we can barely begin to fully grasp the profundity of its loss.

Today is a time to recommit ourselves to educating our communities about this heritage and about the Holocaust.  The United States is proud to continue to support Lithuania in this effort.

One of the most fundamental lessons of the Holocaust is that silence in the face of intolerance poses a grave danger to us all.  Rising levels of anti-Semitism around the world, including in Lithuania and in my own country, the United States, cannot be ignored.

Our response must be clear:  Hate has no home here.  To distort history by diminishing the suffering of the victims of the Holocaust or rehabilitating the Nazis and their collaborators is to erode the values that bind our countries.

I am confident that together, we can strengthen our commitment to these values and secure them for future generations.  I can think of no more important way to honor the victims of the Holocaust and their families, and I remain as committed as ever to standing with you in this effort.

Thank you for the opportunity to stand with you today.