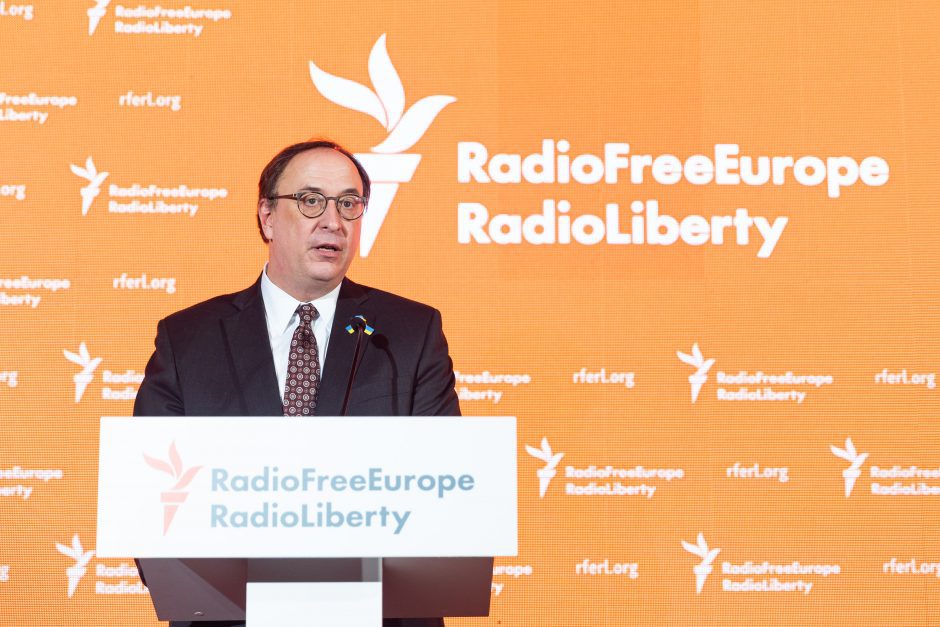 Thank you all for being here tonight and showing support for Radio Free Europe/Radio Liberty and their mission to promote free and independent journalism around the world.

I am pleased to see the RFE/RL team operating here in Lithuania, which has become a safe haven to those fleeing tyranny and oppression. I would like to commend the journalists who continue fighting for media freedom and putting themselves at great risk so that people around the world, including Russia and Belarus, can rightfully exercise their basic rights, including freedom of speech and expression.

For over 70 years the RFE/RL has been promoting democratic values by providing accurate, uncensored news and opening debate, especially in places where disinformation is pervasive and free press is under threat.

The brave people of Ukraine and Belarus consistently remind us that the struggle for democracy and freedom is ongoing. All of us – not just journalists — share the responsibility to safeguard freedom of speech, thought, and independent media because they are essential to hold leaders accountable and promote vibrant and free societies.

The courage of reporters to do just this in Belarus has long made them a target of the Lukashenka regime’s brutal repression.

The regime has nearly completely shuttered independent media because it has reason to fear the fundamental duty of journalists to report on events objectively and question authority . Hundreds of journalists are unjustly detained as political prisoners in the country Reporters without Borders has called the most dangerous place in Europe to be a journalist.

We were overjoyed by Aleh Hruzdzilovich’s release last September, but the struggle against the repression of the regime continues.

We call for the release of Andrey Kuznechyk, Ihar Losik, and the nearly 1,500 other political prisoners in Belarus.

It is an enduring priority of the United States to advocate for and support journalists in delivering accurate and bias-free reporting. We strongly believe that having journalists and reporters ask difficult questions makes our governments more effective.

Journalistic integrity and professional reporting are crucial to the livelihood of democracies worldwide, and what the RFE/RL have been doing for more than 70 years is precisely that – helping build a more democratic world.

I would like to congratulate the RFE/RL team on its new office here in Lithuania and call upon everyone to support independent journalism in any way you can.