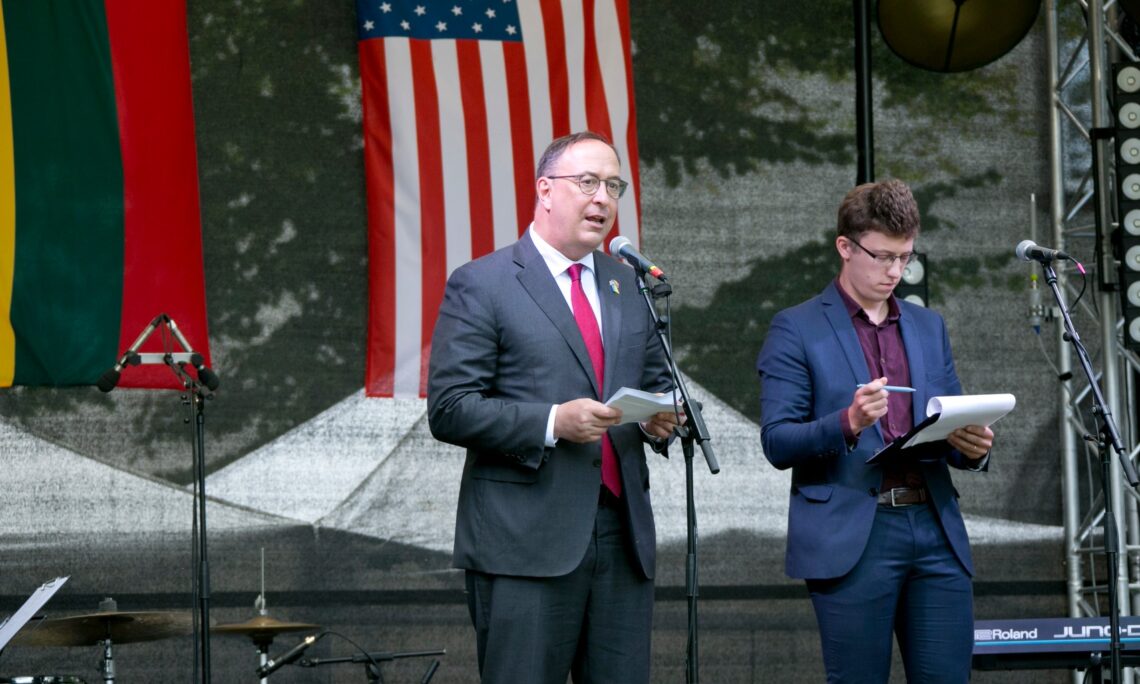 100 years!  100 years of continuous, uninterrupted friendship.  100 years of shared values.  100 years of promoting democracy and opposing oppression.  For a century, Lithuanians, your flag has flown at the State Department in Washington.  Since July 28, 1922, when President. Harding recognized your independence, our relations have continued to grow.

A crucial moment in our relationship was the Sumner Welles declaration — the unambiguous official U.S. statement in 1940 that we would never recognize the Soviet Union’s deliberate annihilation of your political independence and territorial integrity … it is the policy of the United States that Lithuania was, is, and always will be entitled to freedom and sovereignty.

During the dark times of occupation, Lithuanians at home and abroad advocated fiercely for your country’s interests and refused to allow the world to forget about Lithuanian identity and the nation’s right to independence.  The importance of this recognition is at the forefront of our minds today considering the ongoing conflict in Ukraine. The brave citizens of Ukraine remind us that the struggle for democracy and freedom did not end with the restoration of independence or the end of the Soviet Union.

Belarus also reminds us of the importance of liberty and individual dignity. Lithuania has led the way by offering safe haven to Belarusians fleeing tyranny and imposing tough sanctions to encourage the regime to release the more than 1200 political prisoners it unjustly holds.

Lithuania remains an unwavering beacon of self-determination and resilience to the people of Ukraine and Belarus and all those who seek a more just future.

Today, Lithuania is the United States’ valued friend and NATO ally. In the face of common threats and challenges from autocracies to our security and shared democratic values, we stand beside you in unshakeable solidarity. We are committed to securing our mutual economic prosperity, rejecting economic coercion, and reinforcing our transatlantic relationship and unity with our allies. At the Madrid Summit, President Biden announced enhanced U.S. contributions to security of the Baltic states and that the United Stations will maintain a persistent, heel-to-toe presence of troops in Lithuania and the Baltic region.

We celebrate our countries’ cultural and athletic achievements, and the hard work and high hopes they represent.  In fact, this Saturday, August 6, will mark the 30th anniversary of the historic Olympic basketball game played by the extraordinary dream teams of Lithuania and the United States. And it is no coincidence that in the same year that we celebrate 100 years of diplomatic relations between our two countries, we also celebrate 100 years of Lithuanian basketball.

We also celebrate the strong economic links and advances in innovation shared between our two countries.  It is no accident that a number of important American companies – with well-known names such as Thermo-Fisher and Western Union – have chosen Lithuania as a site for major operations.  Lithuania is a great place for them to invest as it offers not only a highly educated and motivated workforce but also a pro-business environment that is under-girded by the democratic values of transparency, rule of law, and individual responsibility and freedom.

It has been an honor for me to serve as U.S. Ambassador during two and a half of these historic 100 years of diplomatic relations.  I am certain that in the next 100 the democratic bonds between our countries and peoples will only become stronger.