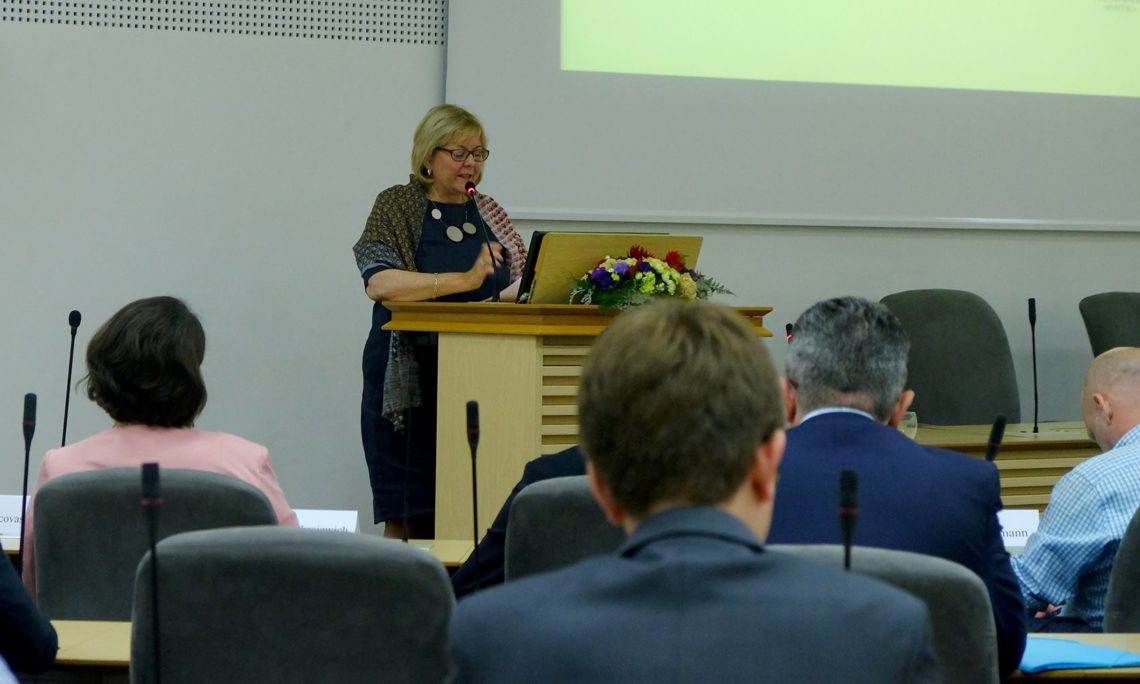 It is a great honor and privilege for me to take part in this symposium, and to pay my respects to Chiune Sugihara, to Jan Zwartendijk, and to all those who assisted them in their efforts to save lives.  As a career diplomat, the stories of these brave officials, who defied the odds, often defying their own government policies, are awe-inspiring.

All of us know Sugihara and Zwartendijk’s work here in Kaunas and their successful partnership, which saved the lives of 8,000 Jews.  And we are also familiar with the cost.  Sugihara was forced to resign from his ministry upon his return to Japan, and his life-saving efforts were not widely recognized until decades later.

Sugihara himself recognized this possible consequence for his actions.  In an interview in 1985, he said: “I knew that somebody would surely complain about me in the future.  But, I myself thought this would be the right thing to do.  There is nothing wrong in saving many people’s lives.”

“Nothing wrong in saving lives.”  It is such a simple statement, but the act of saving lives was not simple.  It cannot be simple when the list of diplomats who acted, who used their authority to issue visas, is so short.  According to the United Nations’ exhibit “Visas for Life: The Righteous Diplomats,” only 84 diplomats took this exceptional effort to save Jews and other refugees during the Second World War.

However, those 84 exceptions came from 24 different countries, all of them with diverse backgrounds and training, but all making the crucial decision to save lives.

One of those 84 was a U.S. diplomat by the name of Hiram Bingham.

Bingham was assigned to the consulate in Marseilles, which at the time was governed by Vichy France.  With the onset of the war, Bingham began cooperating with the Emergency Rescue Committee and another American, Varian Fry, by visiting refugee camps and identifying vulnerable people.  However, the official U.S. policy was to restrict immigration from Europe.

Despite the risks, Bingham defied State Department policy by surreptitiously issuing more than 2,500 visas to Jews desperate to flee Nazi-controlled Europe.  In some cases, Bingham hid Jews in his villa in Marseilles, provided disguises, or falsified documents.

Through his actions, Bingham created an escape route to the United States for such people as the artist Marc Chagall, the novelist Lion Feuchtwanger, and the political theorist Hannah Arendt, who herself went on to become a key scholar on the threat of totalitarianism.  For these actions, Bingham lost his post and was transferred to South America.  Ultimately, Bingham left the Foreign Service in protest of its policies.

But, like so many other rescuers, Bingham rarely spoke about his actions.  It was not until after his death that his family learned of his efforts, when his son was cleaning out his home in Connecticut and found papers detailing his father’s wartime activities.

The historian Timothy Snyder, who has spent years studying the recollections of these rescuers, says that they very rarely discuss their actions, and instead speak with modesty and diffidence.  The most common response was that they did what any other person would do.  They acted to save lives.  Snyder calls this trait “the banality of good.”  A simple answer to very difficult questions.

Before serving here in Lithuania, I was the U.S. Consul General in Krakow, Poland.  That was my first time working closely on this important issue, and I was privileged to know many great people who dedicated themselves to tolerance and religious freedom, to overcoming the dark legacy that the Holocaust has left on the world.

One of those people was Rabbi Michael Schudrich, who was born in America and became the Chief Rabbi of Poland.  We would often talk about the rescuers, those heroes who took in innocent people and saved them from certain death, despite the pitiless fate that awaited them if they were caught.

One day I asked Rabbi Schudrich his thoughts on why some people rescued Jews while others did not.  One point he made has always stuck with me:  the rescuers did not hesitate.  Those who rescued told him they did not stop to think, to weigh the options, to consider the consequences.  They saw a situation that required decisive action, and they took it.

Despite the complexity of the situation, despite the geopolitical environment, despite the official policies and the authorities that enforced them, and perhaps most of all, despite the threat of death to themselves and their families if they were caught, they saw just a problem with a simple answer:  save lives, and they did so.  They acted on their gut; they acted on a higher moral authority; they acted with humanity.

For us diplomats, this action is in some ways the opposite of our jobs.  On the contrary, our nations send us forth to think, to analyze, to look at various courses of action, to assess the possible results, and ultimately, to carry out official policy.  For diplomats, it is sometimes too easy to become lost in the details, in the complexity, in the nuance.

And quite frankly, it is always difficult for some people, in any position, to put aside career or bureaucratic concerns and take action they believe is right but runs counter to the orders they have received.  So this is what makes the actions of these rescuer diplomats so unique, and why these actions remain such an important lesson for all of us today.

In today’s U.S. State Department, we take great pride in our tradition of what we call “constructive dissent.”  By constructive dissent, we mean the space to challenge the system from within and to question the status quo when it is necessary, when we see the need for this higher moral authority.

Every year, the Department gives an award for the best use of constructive dissent, which is celebrating its 50th anniversary in 2018, as the tradition was forged in the difficult years of our military engagement in Vietnam.

Today, we are proud to cultivate an environment in which dissenting views are not only welcomed but encouraged.

In honor of his actions, Hiram Bingham was posthumously awarded the constructive dissent award in 2000 by Secretary of State Madeleine Albright.  And we teach his example to incoming diplomats.

I am proud today to honor Chiune Sugihara, and Hiram Bingham, and all the courageous individuals who acted in the defense of humanity, often contradicting official orders and at significant personal cost.  May the memories of their actions, of their modesty, and of their innate goodness guide us in our lives and in our work.