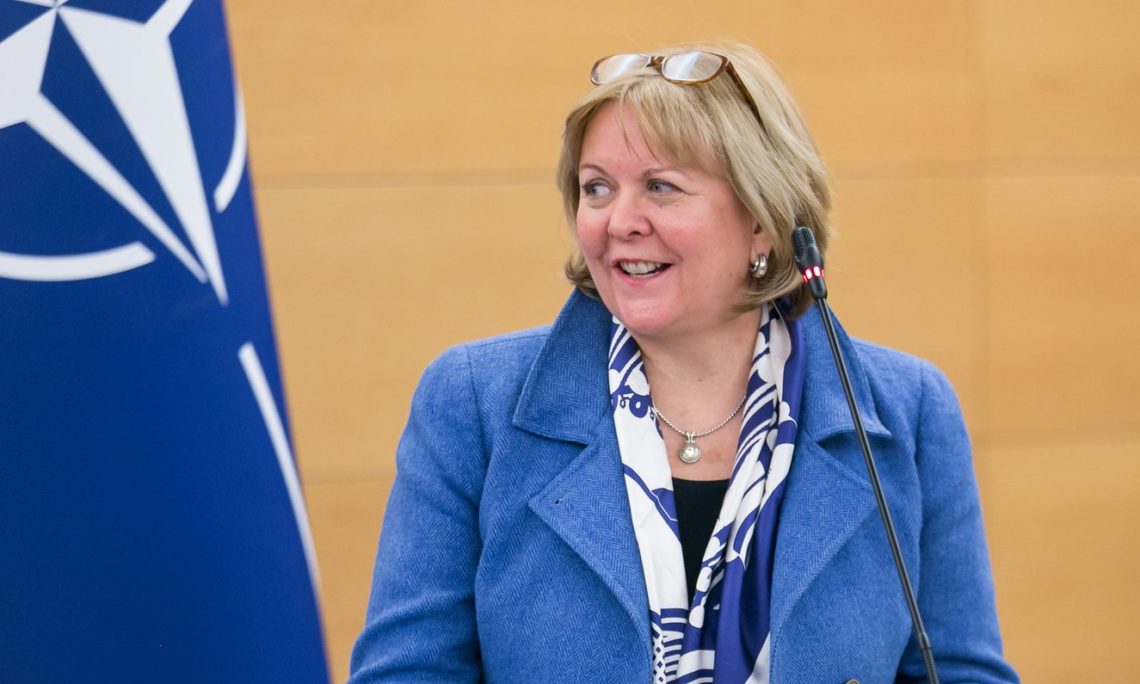 Ambassador Hall’s Remarks at the Ceremony to Present the Truman-Reagan Medal of Freedom to President Valdas Adamkus
Ministry of Foreign Affairs of the Republic of Lithuania, Vilnius
Wednesday, November 28, 2019

It is a great honor and privilege for me to take part today in this ceremony to present the Truman-Reagan Medal of Freedom to President Valdas Adamkus.  Each year, the Victims of Communism Memorial Foundation bestows this medal on individuals and institutions that have demonstrated a life-long commitment to freedom, democracy, and opposition to communism and all other forms of tyranny.

As President Reagan once said:  “Freedom is never more than one generation away from extinction. We didn’t pass it on to our children in the bloodstream.  It must be fought for, protected, and handed on for them to do the same …”

I am thrilled that President Adamkus’ life-long dedication and commitment to freedom and democracy has been recognized.  His receipt of this award places him among such renowned leaders as Presidents Lech Walesa of Poland and Vaclav Havel of the Czech Republic — as well as previous Lithuanian recipients of this award, including Professor Vytautas Landsbergis.

For me, as U.S. ambassador to Lithuania, this is a very moving moment.  I have always had a special place in my heart for President Adamkus.  …

His work is an inspiration to me, and has been to the American ambassadors who have served in Lithuania before me.

While a student in the United States, Mr. Adamkus, together with other Lithuanian-Americans, collected some 40,000 signatures petitioning the U.S. government to intervene in the ongoing deportations of Lithuanians to Siberia by the Soviets.  He also raised concerns about other Soviet activities in occupied Lithuania to the United Nations Secretary General and to President John F. Kennedy.

As President of Lithuania, Valdas Adamkus actively promoted democracy in the formerly Soviet Eastern European nations.  He served as a mediator during Ukraine’s political crisis, and traveled to Georgia to support Georgian citizens protesting Russian aggression in 2008.

And here in Lithuania, his contributions were critical to Lithuania’s joining both NATO and the European Union.  Speaking at a recent international conference on strengthening transatlantic resilience, President Adamkus called on Europe and the United States to focus on current threats together — the way we once resisted “the Communist ideology.”

The U.S. Embassy’s relationship with President Adamkus has continued beyond his presidency.  Just this year, we joined forces with the Valdas Adamkus Presidential Library and Museum to create and showcase a traveling exhibition “Across the Ocean: The Age of Friendship between Lithuania and the United States of America” to celebrate the centennial of the restoration of Lithuania’s statehood.

The exhibition toured 15 towns and cities across Lithuania before returning to its permanent home – the Adamkus Library – on November 23.  During its eight-month tour, the exhibit reached important audiences helping to counter the Kremlin’s attempts to weaken the credibility of the United States’ support for Europe.

I would like to thank the Victims of Communism Memorial Foundation, and its executive director Marion Smith, for having recognized President Adamkus for his exemplary lifelong commitment.  I would also like to add a special thanks to Minister Linkevičius for hosting this very special ceremony today.

And, I would like to add my sincerest congratulations to President Adamkus on this special occasion.  A life well lived.