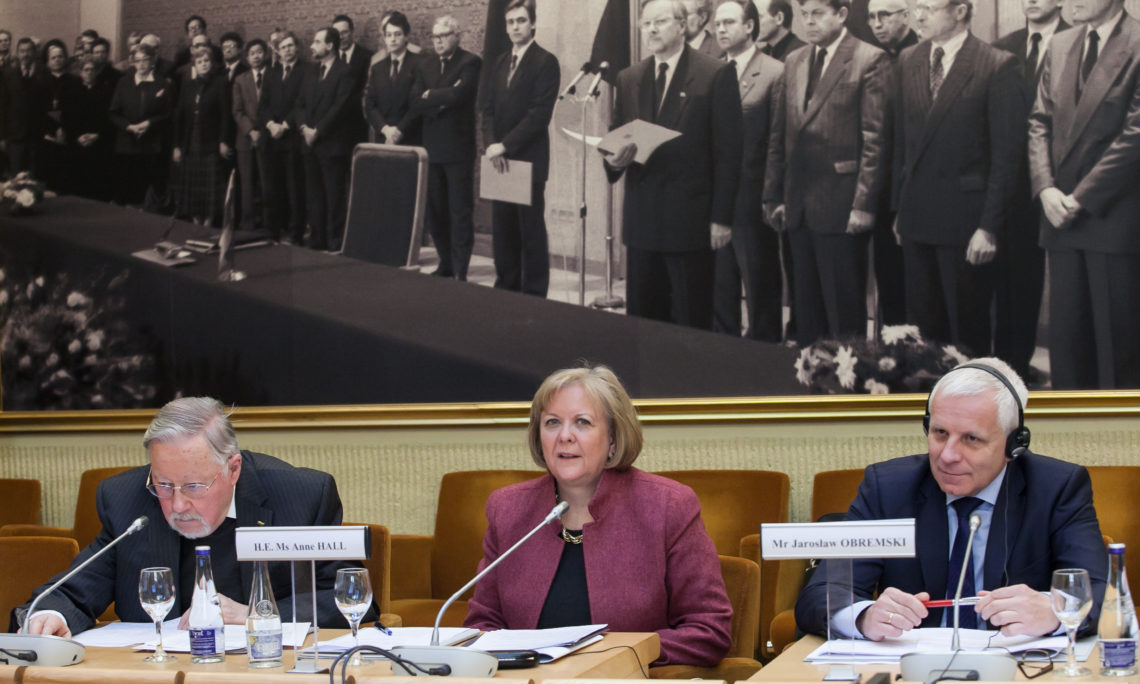 Ladies and gentlemen, honored guests, I thank you for this opportunity to address you as we celebrate the 27th anniversary of the restoration of Lithuania’s independence.

The trans-Atlantic ties that bind Europe and the United States are grounded on our common legacy — a legacy of fighting for and defending the freedom that is the basis for our trusted alliance.

Whatever the challenge we face, we are all stronger with friends and allies that share the same values.

Whether through parliamentary forums like this one, mechanisms such as NATO and the European Union, it is only with unity and commitment to our freedom and democratic ideals that we can best address the threats to democracy and stability we face today.

In his State of the Union speech a week and a half ago, President Trump called for direct, robust and meaningful engagement with the world, noting the vital security interests that we share with our allies across the globe.

He said, and I quote, “We strongly support NATO, an alliance forged through the bonds of two World Wars that dethroned fascism, and a Cold War that defeated communism.”

In Munich, Vice President Pence told European leaders that “the United States of America strongly supports NATO and will be unwavering in our commitment to this trans-Atlantic alliance.”

He went on to say, “the fates of the United States and Europe are intertwined.”

Indeed.  It is when we stand together that we are most effective in upholding our common values and defending the international rule-based order on which our security and prosperity depend.

To meet the challenges we face, our cooperation must extend beyond defense cooperation, to make our economies, governments and societies resilient and self-reliant.

Lithuania’s remarkable progress toward energy security and diversity benefits the entire Baltic region, and has made Lithuania a model for other countries seeking to enhance their own energy security.  Last fall, I visited Lithuania’s impressive symbol of this accomplishment in Klaipeda during a visit to the floating LNG terminal “Independence.”

Energy experts all know what Lithuanians know — that this was a game-changer.  Because of the “Independence,” there is now a strong regional natural gas market, where no single provider has the ability to control prices or supply.  That’s freedom!

Similarly, through new connections to Poland and Sweden, Lithuania now has reliable sources of electric power and has brought the cost of electricity down by over 14 percent.  When the Baltic region is ultimately synchronized with the European grid — which must happen — consumers throughout the region will enjoy more secure access to clean, safe power sources, which can only benefit the entire market.

Lithuania is also making rapid progress on its road map for accession to the OECD, something that will bring more transparency and stability to the economy, and make Lithuania even more attractive to foreign investors.  I look forward to more U.S. companies working with Lithuanian companies, and more Lithuanian companies doing business in the United States.

And, of course, we cannot forget our shared values.

Lithuania knows well the meaning and value of human rights.  Let us not forget the long road Lithuania took to get here.  During the dark days of Soviet occupation, when your flag could not fly in Vilnius, when the Latvian and Estonian flags could not fly in their capitals, their flags waved proudly in Washington, DC.

And on that fateful day on August 23, 1989, more than two million Lithuanians, Latvians, and Estonians joined hands to peacefully retake their countries and reclaim their right to live freely.  All guided by the songs of your forebearers.  It’s that same spirit and yearning for democracy that guides Lithuania today.  Every day, Lithuania is taking steps that will make this country an even stronger, more democratic society for its children and grandchildren.  And through its own passion for freedom and democracy, Lithuania is supporting the right to self-determination and Western values in the region – as a close and valued friend to Ukraine, Georgia, and Moldova.

The U.S. is paying attention to what is happening in the Baltics.  The United States welcomes Lithuania’s commitment to meeting and surpassing NATO’s important benchmark of 2% on defense spending.  Over the past few months, Senators Dick Durbin, John McCain, Lindsey Graham, and Amy Klobuchar — in addition to an unprecedented number of senior congressional staff members and high-level State Department visitors — have come to Lithuania.  They have all made clear that Lithuania is a strategic NATO ally and close partner of the United States, and that the U.S. commitment to NATO and Article 5 of the Washington Treaty is ironclad.

As President Trump told Americans on February 28, “Free nations are the best vehicle for expressing the will of the people — and America respects the right of all nations to chart their own path.  …  But we know that America is better off, when there is less conflict — not more.”

As Dr. Landsbergis said, and I am paraphrasing him, “working for trans-Atlantic solidarity means working for peace.”