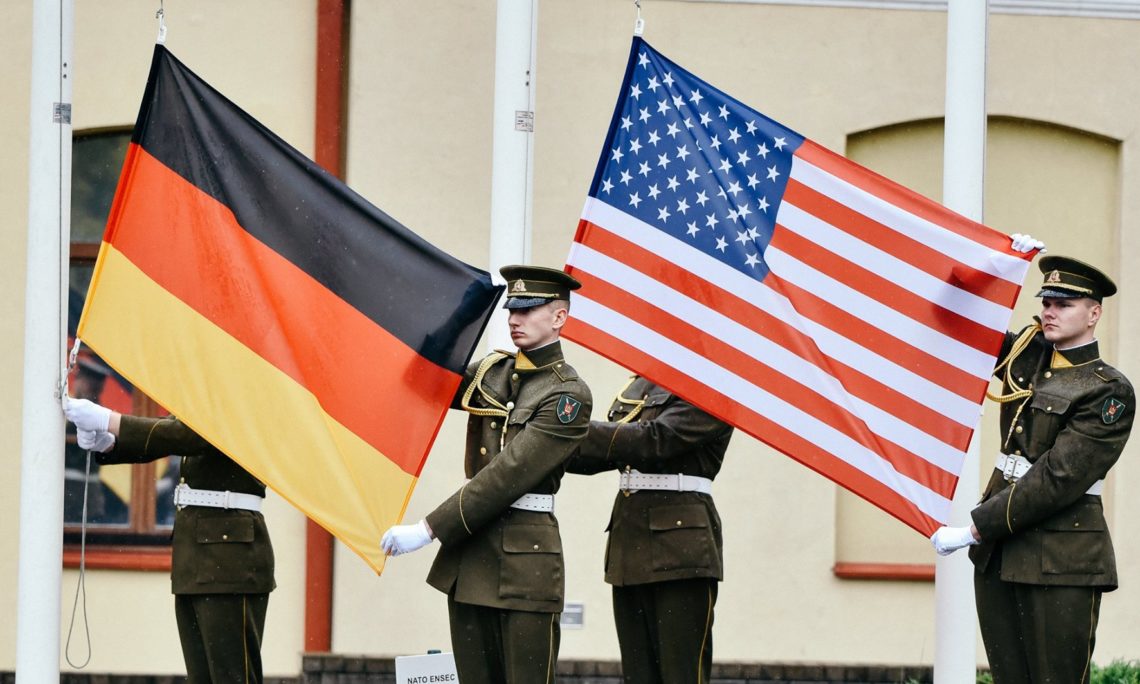 Remarks for the U.S. and German Flags Raising Ceremony and the Fifth Anniversary of the NATO Energy Security Center of Excellence

(as delivered by Diane Kohn, Political and Economic Deputy Chief)

Ladies and gentlemen, honored guests, I thank you for this opportunity to address you as we celebrate the 5th anniversary of the NATO Energy Security Center of Excellence.

As Vice President Pence said in Tallinn on July 31, a strong and united NATO is needed more today than at any point since the collapse of Communism a quarter-century ago.  The Baltic States, on the border of our Alliance, play an outsized role in ensuring our security.  And as Vice President Pence emphasized:  the United States is with you.  America stands with the nations and people of the Baltic States — and we always will.  We stand with our NATO allies in our commitment to your security.

This center was established because NATO recognized that energy security is a collective defense issue.  It could not be located in a more appropriate location than here in Vilnius.

Lithuania’s commitment to increasing energy security and diversity in this region is well known.  Last fall, I witnessed Lithuania’s impressive symbol of this accomplishment in Klaipeda during a visit to the LNG ship Independence.   Energy sector experts know that this was a game-changer – because of the Independence, there is now a strong regional natural gas market, where no one provider has the ability to control prices or supply.  As a result, natural gas is plentiful and users are able to negotiate contracts at favorable, market-based terms.

Similarly, through new connections to Poland and Sweden, Lithuania has reliable sources of electric power and has brought the cost of electricity down by over 14 percent.  When the Baltic region is ultimately synchronized with the European grid, consumers throughout the region will enjoy more secure access to clean, safe power sources.

By hosting the NATO Energy Security Center of Excellence, Lithuania has not just shown its commitment to improving energy security, but also to developing and sharing expertise in this field among Allies.  Energy is a strategic need:  it is critical to our defense, the strength of our economies, and the resilience of our societies.  By working to protect critical energy infrastructure, you not only ensure the uninterrupted availability and resiliency of energy sources for Alliance forces, but also for critical energy needs outside of the military.

Through your cooperation with other centers, national military bodies, think-tanks, academia and private industry to make our armed forces more energy efficient, and our defense greener and smarter, you are helping to foster know-how that will strengthen our economies and societies as well.

And by enhancing strategic awareness of the possible security implications of energy developments, you are ensuring we will have the best answers not just for today, but for tomorrow as well.

The U.S. is paying attention to what is happening in the Baltics. Over the past six months, we have had numerous senators, congressmen, senior congressional staff members, high-level State Department visitors, as well as U.S. Secretary of Defense Mattis, come to Lithuania.  These visitors all emphasized that the United States sees Lithuania as a strong partner and friend in Europe.  Secretary Mattis said:  “It is really quite energizing to see young soldiers from across the NATO alliance working together in the forests of Lithuania and elsewhere in the Baltic region as they make clear in a fully defensive orientation that we stand united and together.”

We recognize and appreciate the contribution that Lithuania itself is making to our common defense — from committing to spend 2% or more of GDP on defense, to hosting centers such as the Energy Security Center of Excellence.  I am glad that U.S. institutions like the Naval Postgraduate School are Center partners, and am looking forward to a growing U.S. contribution to the Center as we continue to work together.

Again, congratulations on your 5th anniversary and I wish you all great success in your continued endeavors.