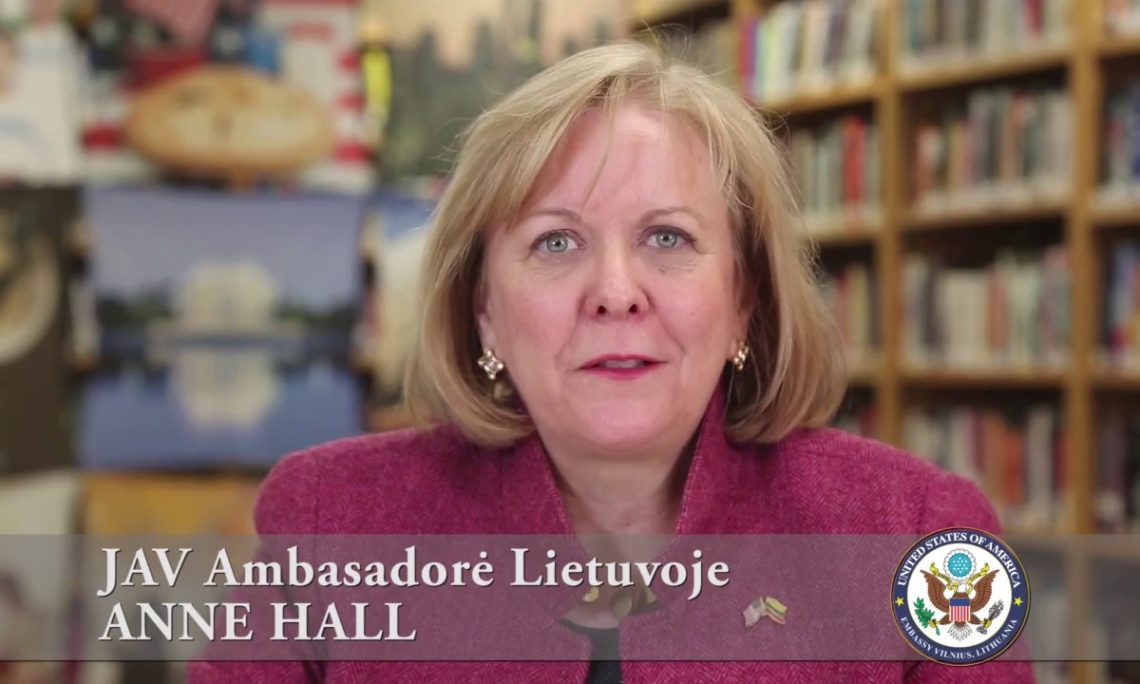 Thank you for this opportunity to share my thoughts on Lithuanian-American relations with the distinguished journalists and participants of the Ministry of Foreign Affairs’ Conference on Lithuanian Foreign Policy for Regional Media.

It has been an honor and a privilege for me to return to Lithuania as the U.S. Ambassador.  It has been wonderful over the past two months to reconnect with old friends and to meet many new friends.

As the U.S. Ambassador, I have several priorities I want to focus on during my time in Lithuania.  None of those is more important than security.

Lithuania is a close friend of the United States and a strategic NATO ally.  The long-standing friendship and partnership between our two countries is grounded in historical family ties and the bedrock of America’s steadfast non-recognition of the Soviet Union’s occupation of Lithuania during the cold war.  It has flourished through many different presidential administrations, both Republican and Democratic.

Today we are seeing the beginning of a new phase of NATO in Europe, as the decisions at the NATO summit in Warsaw are implemented.  Multinational NATO battlegroups will be deployed throughout the region, led by Germany in Lithuania, Canada in Latvia, the United Kingdom in Estonia, and the United States in Poland.  As NATO Secretary General has stated, “these forces will be truly multinational, sending an unmistakable message that NATO stands as one, and attack on any ally will be considered an attack on us all.”  In addition, the U.S. military also will continue to conduct training and exercises in Lithuania.

I am confident that Lithuanian-American relations will remain strong and our cooperation will develop. Not only in the area of regional security, but in other areas as well.

We are working together to highlight our common values and fight against propaganda and disinformation that seeks to discredit democracy and free societies and destabilize the region. The best response to this kind of malign influence is to defend our values, expose false information and fake news, and to encourage wide distribution of truthful information.

We will also support economic growth and entrepreneurship in Lithuania.  I want to see more Lithuanian companies doing business with America. There is so much creativity and energy in Lithuania, including a growing start-up scene.  We share an entrepreneurial business culture that has enormous potential to build and expand the business partnerships we have today.

Finally, there is nothing more important in the long run than the friendship between our two peoples, built on shared experiences and mutual understanding.  I look forward to increasing the people-to-people connections between Lithuanians and Americans.  Next year we will celebrate 25 years of exchange programs between our two countries.  During that time, more than 1,000 Lithuanians have participated in exchange programs in the United States, on topics ranging from good governance to arts and culture, science and security.   In addition,  every year, between 20-25  Lithuanian high school students are now able to spend a year in America living with an American family and attending school, thanks to the exchange programs FLEX and ASSIST.

Many Lithuanian college students also have opportunities to spend a summer working and getting to know the United States through the State  Department’s popular Summer Work and Travel program.  Over the last two years, we have seen a 25% increase in the number of Lithuanians applying for program, and we will again this year reach out to students in February through a web-chat question and answer session to help them learn about how to apply.  All of these exchange programs provide life-changing experiences for the students and help to create friendships and experiences that will guide us in the 21st century.  Information on them can be found on our Embassy website.  We’ll also post details about the timing of our web-chat on our facebook page.

We also look for other creative ways to connect people. For example, one of my top priorities is to expand the opportunities for video chats between American and Lithuanian students – classroom to classroom.  We have already created a few relationships and are reaching out to schools in the United States to create more. We also are putting mobile Info Terminals in libraries, shopping malls, and community centers around the country to provide current information about the U.S.

The strong friendship between our countries mirrors the strong personal relationships the embassy has developed with Lithuanians. I look forward to even more outreach and personal interactions with students, government officials, and civil society leaders, not only in Vilnius, but across the country.

I recently asked the embassy’s Facebook followers to suggest places in Lithuania that I should visit; I am looking forward to going to a few of my favorite spots, as well as traveling to new places that were suggested.  I look forward to meeting mayors, talking with students, representatives of non-governmental organizations and people involved in the arts and culture.  I will also visit American and Lithuanian business and as well as Lithuania’s cultural and historical sites, and hopefully will be able to talk with some of you as I travel.  It is an exciting time to be in Lithuania.

I see so much potential in Lithuania and so many opportunities for our countries to enhance our cooperation in numerous areas. I look forward with great pleasure to serving as the American Ambassador to Lithuania as our countries work together to achieve continued prosperity and security for Lithuania and the region.