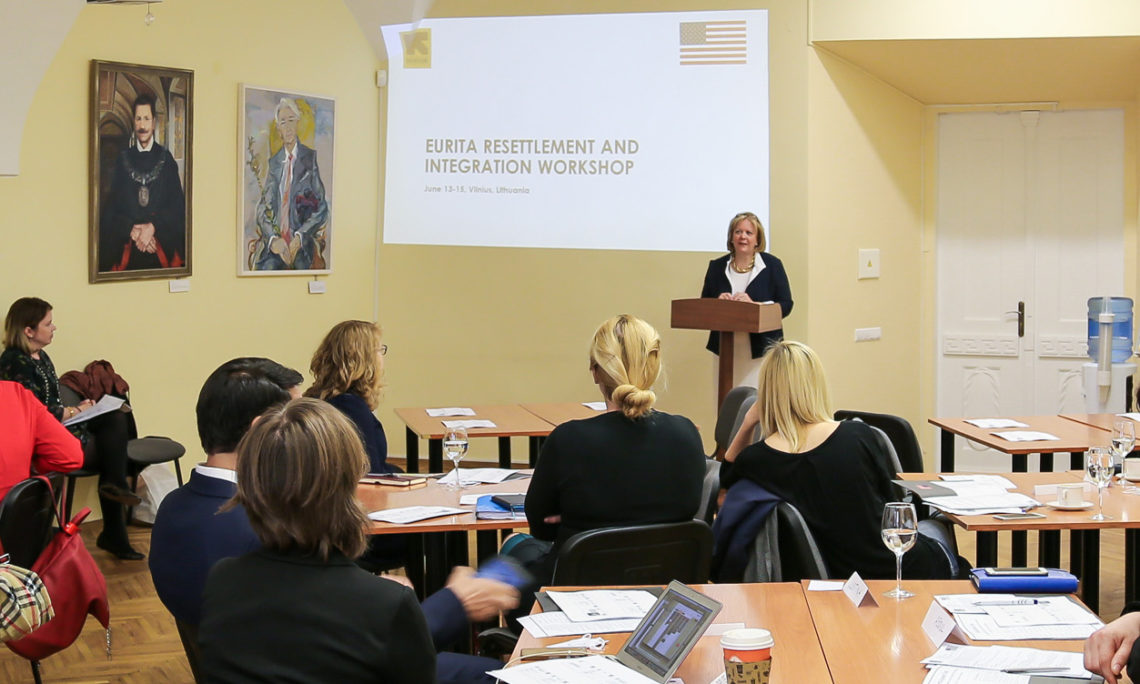 Good morning ladies and gentlemen, it is wonderful to see you all here at the “EURITA Workshop on Resettlement and Integration.” It is an honor for me to welcome you today.

First I’d like to thank you all for your participation. I know your time is extremely valuable so greatly appreciate your attendance. My thanks especially to Susan, Sarah, and Marissa of the International Rescue Committee for coming to Lithuania to hold this workshop.

Today the number of forcibly displaced people worldwide is the largest ever recorded. Conflicts raging in places like Syria, Iraq, Afghanistan, Yemen, Libya and South Sudan have produced 65 million refugees, internally displaced, or people seeking asylum across the globe – including here in Lithuania.

As we all know well, there are many challenges to the integration of refugees, for any country, anywhere in the world. Any time families are forced to flee their homes, find safety in foreign lands, and start new lives in unfamiliar places, they are faced with many hurdles.

America is no exception to this – our history is filled with generation after generation of people coming from all over the world to start new lives, and it has never been easy for the first generation. Their journeys were not easy, and it was a struggle at first to rebuild, to learn a new language and culture, and ultimately make the United States their new home. But eventually they succeeded in creating the melting pot that is modern America.

Lithuanians helped build America in cities like Chicago and Los Angeles, and Lithuania is now opening its arms to resettling 1,105 refugees to Lithuania, to make Lithuania a land of opportunity for those in need. I thank you for that.

The United States remains committed to helping governments and communities throughout Europe host refugees in this critical time. In April, the United States announced at the “Supporting the Future of Syria and the Region” conference that it is providing more than $566 million in additional assistance for those affected by the Syria crisis. This workshop is part of that effort and I am delighted Lithuania is taking part.

The European Refugee Integration Technical Assistance Project, known as EURITA, is a joint collaboration between the U.S. Department of State and the International Rescue Committee, designed to share U.S. refugee resettlement and integration experiences with practitioners in ten European countries. The International Rescue Committee has been offering aid and long-term assistance to refugees since 1933, so I can hardly imagine a better partner for us.

The workshop today features two experts in the field of refugee integration and self-reliance, Susan Donovan and Sarah Krause. They are here to share their expertise and assist in the creation of action plans designed to help refugee communities become self-reliant and integrate with the Lithuanian community.

And it is great to see so many Lithuanian experts and stakeholders here as well. With such a strong gathering, I have high hopes that this workshop, and its resulting action plans, will be very successful in helping Lithuania’s resettlement program.

I wish you all the best of luck in this workshop and I look forward to learning about the results, and its impact on Lithuania’s efforts to integrate refugees.

Thank you again for your participation.