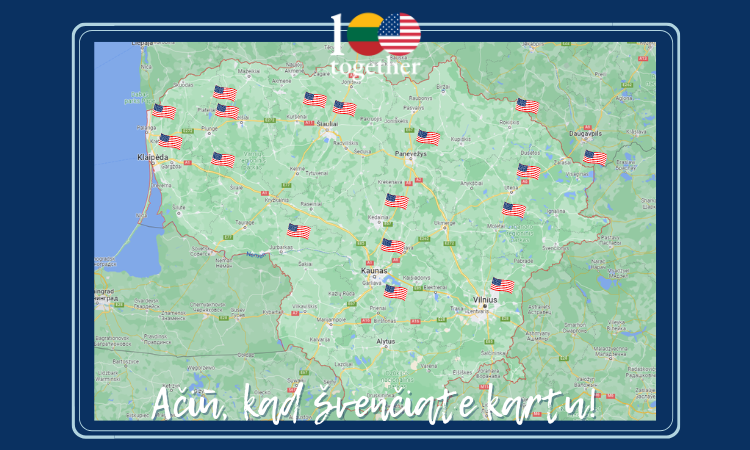 On July 28, we mark 100 years of diplomatic relations between the United States and Lithuania and invite all our friends and partners to mark the occasion in a special way.

Need ideas? Here are some of the events that our friends and partners around Lithuania are organizing to celebrate the occasion:

Time: July 28, Thu., 2.00 PM
Location: Molėtai Ethnocosmology Museum, Žvaigždžių str., Kulionys
Event details: Moletai Ethnocosmology museum will invite NASA internship participants from Lithuania to talk about Lithuanian-U.S. cooperation in space., while S. Lapienis will share the story about Lithuanian flags in space (all of them were transported to space from the U.S. territory), and the idea of taking the Lithuanian flag to the moon during “Apollo” missions. The event is free and will take place in the museum’s “space station”.

Time: July 28 (and after)
Location: Palanga Bridge and Antanas Mončys-Montis Museum
Event details: Please take a photo at the Palanga’s Bridge as it will be be adorned with Lithuanian and American flags; also go visit Antanas Mončys-Montis Museum where you will be able to hear excerpts from “Voice of America” – interviews conducted by Jurgis Blekaitis with American Lithuanian culture, arts and literature representatives as well as civil activists.

Time: July 28 and after
Location: all over Rokiškis
Event details: the U.S. flag will be raised in Rokiškis Independence Square next to the Lithuanian flag. Rokiškis cafe “Grill bankas” invites everyone to enjoy American cuisine and will provide 10 percent discount on their gourmet hamburger, and the first 20 customers who order it will receive a symbolic U.S. flag and a pen with Rokiškis symbollic as a gift.

The public library of the Šiauliai district municipality invites all at 2 p.m. to the Summer reading room in Kuršėnai Park to deepen ones knowledge about baseball – there will be a literary exhibition and a practical lecture titled “Popular Baseball in the USA – what is it?” Lecturer – baseball coach Egidijus Meižys. Meanwhile, Šiauliai District Educational Support Center invites everybody to come on July 28 to enjoy cupcakes decorated with the flags of the USA and Lithuania.

Time: July 28, Thu., and after
Loctaion: The American Corner at the Povilas Višinskis Šiauliai County Public Library
Event details: The American Corner will be hosting an exhibition dedicated to Victor David Brenner, who is best known as the designer of the 1909 U.S. Lincoln Cent, better known as the penny, which features an iconic bust of U.S. President Abraham Lincoln. The image is still in use on the coin today, including Brenner’s initials.

If you’re planning an event, please message us (NevieraV@state.gov and StealySV@state.gov) with the details — maybe someone from the Embassy can attend! Share your photos and videos with the hashtags #100together and #USinLT. From all participants we’ll draw some lucky winners for a special engagement with Ambassador Gilchrist later in the year.