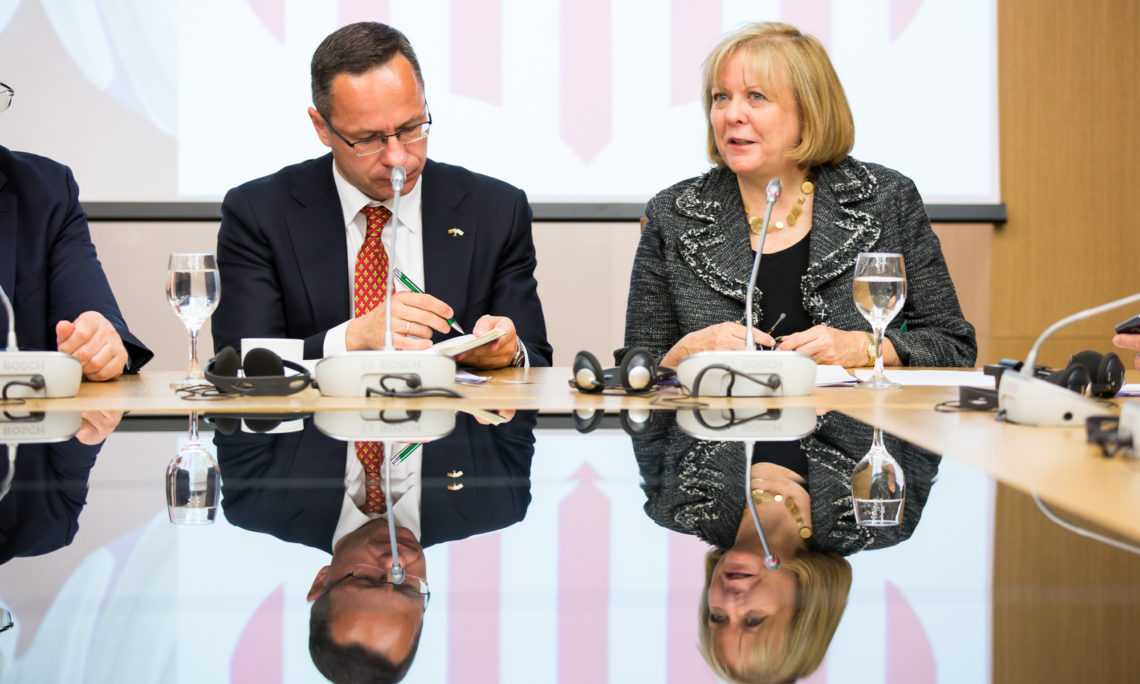 Members of Seimas, distinguished guests, ladies and gentlemen: thank you for this opportunity to address you.  It is always a pleasure to be here at Seimas, and to be in the company of such good friends.

Today, June 5, marks the 70th anniversary of United States Secretary of State George C. Marshall’s address at Harvard University, unveiling the European Aid Program, a program that has become known to all as the “Marshall Plan.”  This plan has taken on legendary status, quite rightly, but I think it is useful to start the discussion today with the why and how this plan took shape.

Secretary Marshall had been Army Chief of Staff from 1939 to 1945, for the entirety of the Second World War.  He had witnessed the extreme scale of violence and destruction that the war brought to Europe and he understood the enormous effort it would take to rebuild.  The world was thankful for the peace, yet, in 1947, the shadow of a third world war was looming.

In his speech at Harvard, Secretary Marshall said:  “Our policy is directed not against any country or doctrine but against hunger, poverty, desperation and chaos.  Its purpose should be the revival of a working economy in the world so as to permit the emergence of political and social conditions in which free institutions can exist…  Any government that is willing to assist in the task of recovery will find full cooperation.  Any government which maneuvers to block the recovery of other countries cannot expect help from us.”

Secretary Marshall realized that instability, both economic and political, was a threat not only to the ravaged countries of Europe, but to the global order itself.  That free institutions would require a bedrock of mutual cooperation and stability.  He understood that the support of the United States would be pivotal to providing this foundation, to overcoming this instability. Secretary Marshall also highlighted that this was not the task for the United States alone.  He said it would not be fitting for our country to unilaterally draw up a program, but that “this was the business of the Europeans.”

And so, following Marshall’s speech, representatives of sixteen countries gathered in Paris to discuss what was needed to rebuild the continent, to create the groundwork for a free and prosperous Europe.  These countries developed a plan, presented it to the United States, and in 1948, congress approved what became known as the Marshall Plan. The United States provided $13.3 billion in assistance to 16 European countries, which would be $150 billion today.  At the time, this represented roughly 12% of the U.S. federal budget.

But the results of this effort were remarkable.  By the end of 1951, industrial production for all participating countries was 64% higher than in 1947.  Total Gross National Product rose by about 25%.  Three-quarters of the intra-European import quota restrictions were eliminated by 1951.  At the end of that year, trade volume within Europe was almost double that of 1947. Perhaps most importantly, a sense of political stability returned to Western Europe.  Out of the darkest of wars came the hope for an ever stronger Europe.  Our common vision of a Europe, whole, free and at peace emerged, as did cooperation among European nations that led eventually to the establishment of the Coal and Steel Community in 1952 and later the European Community.  And eventually the European Union we see today.

The Marshall Plan was a critical post-war step in strengthening the Western alliance and fortifying it for the long Cold War ahead.  It represents the importance of our shared values and provided the foundation of the transatlantic partnership, a partnership based on values, beyond just economic self-interest.

Ever since the Second World War, the vision of a Europe, whole, free and at peace has been a central tenet of U.S. foreign policy.  In the seventy years since the Marshall Plan was adopted, transatlantic cooperation has led to a strong, growing NATO Alliance and provided peace and prosperity for generations of Europeans and Americans both. This commitment to Europe continues today.  In his State of the Union speech, President Trump highlighted the transatlantic partnership based on share values.  He said, and I quote, “We strongly support NATO, an alliance forged through the bonds of two World Wars that dethroned fascism, and a Cold War that defeated communism.”  Vice President Pence told European leaders in Munich that “the United States of America strongly supports NATO and will be unwavering in our commitment to this trans-Atlantic alliance.  The fates of the United States and Europe are intertwined.”

Right now the U.S. and our transatlantic allies are implementing the most significant reinforcement of NATO’s collective defense since the Cold War.  As agreed at the 2016 Warsaw Summit, this includes the establishment of a rotational enhanced Forward Presence, consisting of four battalion-sized multinational battle groups, here in Lithuania, as well as in Estonia, Latvia, and Poland.  The United States will continue to support NATO’s enhanced Forward Presence by continuing our status as the Framework Nation for the battle group in Poland. The President’s 2018 Budget request seeks $4.8 billion in funding for the U.S. European Reassurance Initiative, known as the ERI for 2018; a $1.4 billion increase over last year’s funding levels.  The ERI enables the United States to enhance the U.S. deterrence posture, increase the readiness and responsiveness of U.S. forces in Europe, support collective defense and security of NATO allies, and bolster security and capacity of U.S. partners.  This enables faster response to any aggression by a regional adversary against NATO sovereign territory.

Our efforts to ensure European security extend to Ukraine.  On May 5, the President signed the FY 2017 Omnibus spending bill, which includes over $560 million for Ukraine, including $150 million for the Defense Department’s Ukraine Security Assistance Initiative. The Administration’s 2018 Request for Ukraine is $203.8 million, not including security assistance.  These funds will continue to help Ukraine combat corruption, strengthen governance and rule of law, promote economic growth, and attract investment.     Ukraine has made significant progress and U.S. support for Ukraine will remain steadfast.  As we have repeated at every Ministerial and Summit since Russia occupied Crimea and began supporting so-called separatist forces in eastern Ukraine, we stand firm in our support of Ukraine’s sovereignty and territorial integrity.  We do not, and will not, accept Russian efforts to change the borders of Ukraine.  We will continue to hold Russia accountable to its Minsk commitments.  And the United States’ sanctions will remain until Moscow reverses the actions that triggered our sanctions.

Let me close today with the words Secretary Marshall closed with seventy years ago:  “With foresight, and a willingness on the part of our people to face up to the vast responsibility which history has clearly placed upon our country, the difficulties (of the present situation) can and will be overcome.”