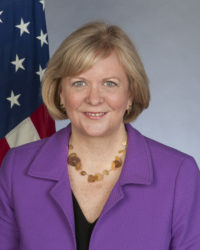 Anne Hall was confirmed by the United States Senate on July 14, 2016 as President Obama’s nominee for Ambassador to the Republic of Lithuania.  Prior to holding this position, Ms. Hall served as the Acting Principal Deputy Assistant Secretary of State for Oceans and International Environmental and Scientific Affairs.

A career member of the senior Foreign Service, class of Minister-Counselor, Ms. Hall has broad experience in Europe.  From August 2013 to July 2014 she served as Director of the Office of Central European Affairs in the Bureau of European and Eurasian Affairs.  In that capacity she was responsible for managing relations with Austria, Bulgaria, the Czech Republic, Hungary, Lichtenstein, Poland, Romania, Slovakia, Slovenia and Switzerland.  From 2010 to 2013 she served as Deputy Chief of Mission and an extended period as Charge d’Affairs at the American Embassy in Vilnius, Lithuania.  From 2006 to 2009 Ms. Hall was Principal Officer and Consul General of the American Consulate General in Krakow, Poland.

Ms. Hall also served as the Senior Cyprus Country Officer in the Office of Southern European Affairs from 2003 to 2005, participating in negotiations in support of a Cyprus settlement.  From 2001 to 2003 Ms. Hall served as the Country Officer for Norway and Denmark in the Office of Nordic and Baltic Affairs, during the lead-up to the Baltic states’ 2004 entry into NATO and the European Union.

She is the recipient of several Superior and Meritorious Honor Awards.  In July 2009 she became the first American Consul General to be awarded the Knight’s Cross of the Order of Merit of the Republic of Poland.  She speaks Lithuanian, Polish, Mandarin Chinese, Spanish and Portuguese. 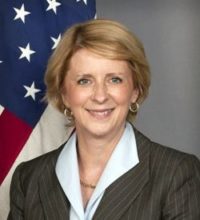 Deborah A. McCarthy, a career member of the Senior Foreign Service, was sworn an the U.S. Ambassador to Lithuania on February 5, 2013.  Prior to holding this position, Ms. McCarthy was the Principal Deputy Assistant Secretary of State for Economic and Business Affairs, responsible for global economic engagement and negotiations (2010-2013). 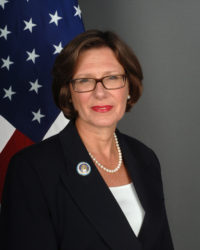 Anne E. Derse is a career member of the Senior Foreign Service with the rank of Minister Counselor.  She joined the State Department in 1981 after receiving an M.A. in International Relations from Johns Hopkins University’s Paul H. Nitze School of Advanced International Studies (SAIS) and a B.A. in French and Linguistics from Macalester College in St. Paul, Minnesota in 1976.

Ambassador Derse was confirmed to be Ambassador to Lithuania in July 2009.  She served as Ambassador to the Republic of Azerbaijan from May 2006 to July 2009.  As Director for Biodefense Policy at the Homeland Security Council (HSC) 2005-2006, she helped develop the Implementation Plan for the U.S. National Strategy for Pandemic Influenza.  She assisted in establishing the U.S. Embassy in Baghdad in 2004-2005 as Minister Counselor for Economic Affairs.  She worked for the Department of State’s Under Secretary for Economic, Business and Agricultural Affairs as Executive Assistant in 2003-2004.  As Minister Counselor for Economic Affairs at the U.S. Mission to the European Union (USEU) from 1999 to 2003, she led the USEU team managing U.S.-EU economic relations.  She served as U.S. Commissioner on the Tripartite Gold Commission, adjudicating sovereign claims for gold seized by the Nazis and recovered by the Allies after World War II, while assigned as Economic Counselor at the U.S. Embassy in Brussels 1997-1999.  Ambassador Derse helped coordinate the United States’ participation in the 1996 APEC Summit as Economic Counselor and Deputy Counselor at the U.S. Embassy in the Philippines 1995-1997.  She served as Special Assistant for Asian Affairs to State’s Under Secretary for Economic, Business and Agricultural Affairs from 1993 to 1995.  As Finance and Development officer and Deputy Economic Counselor in Korea 1989-1993, she helped establish the President’s Economic Initiative, the Dialogue for Economic Cooperation and Treasury-Ministry of Finance Financial Policy Talks.  She also served as trade officer in Singapore 1985-1988, staff assistant to the Counselor of the Department of State 1983-84, and as Vice Consul in Trinidad and Tobago 1981-1983.

Ambassador Derse received a Presidential Meritorious Service Award in 2006, the State Department’s Cordell Hull Award for Senior Economic Achievement in 2004, the Herbert Salzman Award for Excellence in International Economic Performance in 1986, and Department of State Superior Honor Awards in 1994, 1996, 2002, 2004, and 2006.  She graduated with distinction from the Department’s Economic and Commercial Studies program in 1989.  She speaks French, Italian and Azerbaijani.

Ambassador Derse was born in Lakewood, Ohio in 1954.  She is married and has four children. 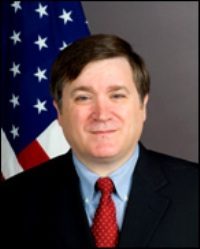 John A. Cloud was sworn in on July 18, 2006 as U.S. Ambassador to the Republic of Lithuania.  Cloud previously served as the Deputy Chief of Mission at the United States Embassy in Berlin.  He served as Chargé d’Affaires ad interim at Embassy Berlin from February 28, 2005 to September 2, 2005.

Mr. Cloud served as Special Assistant to the President and Senior Director for International Economic Affairs on the National Security Council staff from 2001 – 2003.

From 1991 to 1995, Mr. Cloud was the Economic Counselor at the American Embassy in Bonn, Germany.  He served at the State Department from 1988 to 1991 and had earlier assignments in Mexico City and Warsaw.

Mr. Cloud received his B.A. from the University of Connecticut in 1975, and a Masters in International Affairs from George Washington University in 1977.  Mr. Cloud is married and has two children. 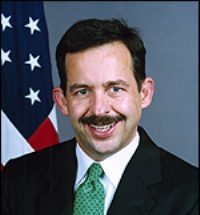 Stephen D. Mull presented credentials to President Paksas as Ambassador Extraordinary and Plenipotentiary of the United States of America to the Republic of Lithuania on August 26, 2003. He is a career member of the Senior Foreign Service in the class of Minister-Counselor.

Prior to this assignment, Ambassador Mull served as the Deputy Chief of Mission at the U.S. Embassy in Jakarta.

Ambassador Mull joined the Foreign Service in March 1982 and has worked in a variety of positions focusing on nations undergoing political and economic transitions. He served two tours in Poland, where more recently as Counselor for Political and Political-Military Affairs he coordinated bilateral efforts to prepare Poland for membership in the NATO alliance. President Kwasniewski in 1997 awarded him the “Knight’s Order of Merit” in recognition of his efforts. In South Africa from 1986 until 1990, he worked in the U.S. Embassy’s political section’s black politics unit, in which capacity he won the State Department’s Director General’s Award for Reporting.

Ambassador Mull is the recipient of the 2002 Baker-Wilkins Award for Outstanding Deputy Chief of Mission, the Presidential Meritorious Service Award, and several Superior Honor Awards.

Ambassador Mull was born April 30, 1958 in Reading, Pennsylvania. He earned a Bachelor of Science in International Politics from Georgetown University in 1980. He is married to Cheryl Stephan, and they have one child, Ryan. 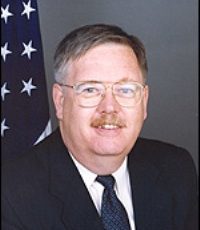 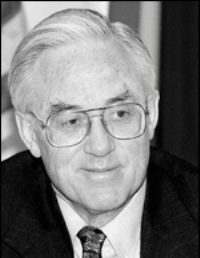 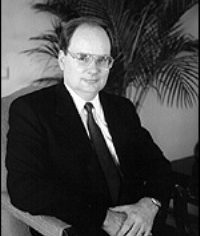 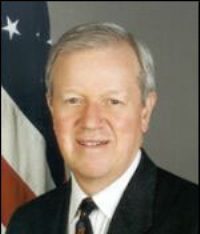