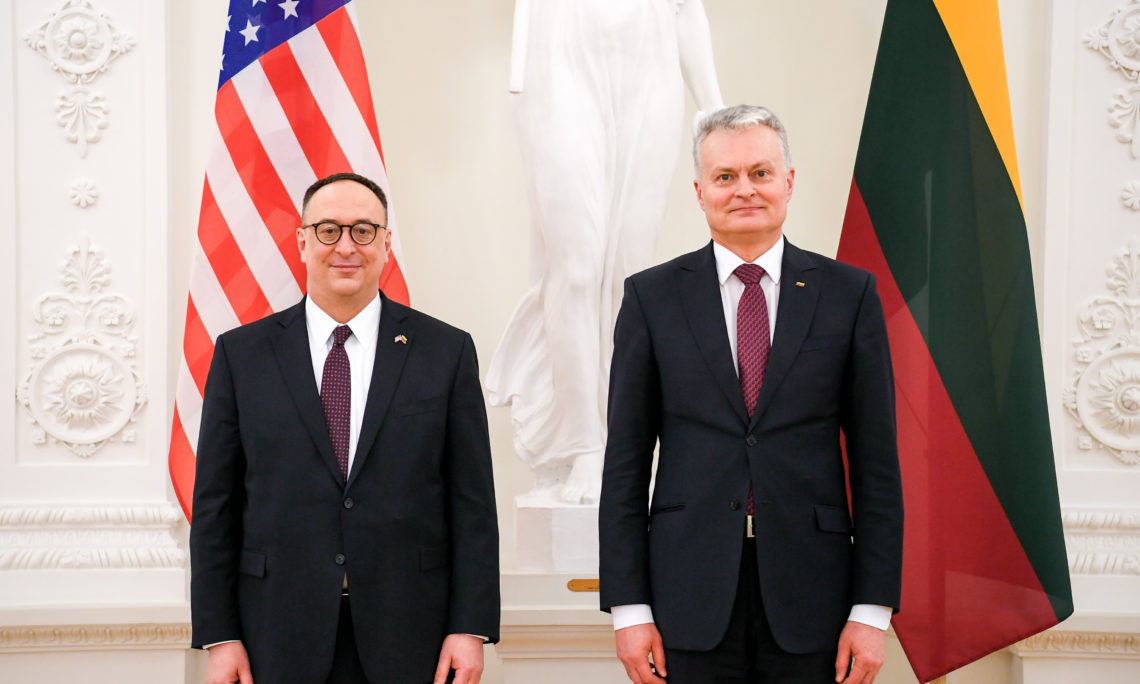 The U.S. Embassy is pleased to announce that Robert S. Gilchrist has presented his credentials to the President of the Republic of Lithuania, Gitanas Nausėda, thus officially assuming his role as the head of the U.S. diplomatic mission to Lithuania.

Ambassador Gilchrist has become well-acquainted with the Baltic region during his tenure as the director of the State Department‘s Office of Nordic and Baltic Affairs and as the deputy chief of mission in the U.S. Embassies in Estonia and Sweden. Other assignments include Romania, Iraq, and serving as director of the State Department’s Operations Center. At his swearing-in ceremony, Ambassador Gilchrist described his appointment as U.S. ambassador to Lithuania as “the greatest honor of my life” and pledged to maintain the strong security, cultural, and economic relationship between the United States and Lithuania.

“Lithuania is a strong and valuable Ally and friend of the United States. We recognize your contributions to global security; your expertise at combatting disinformation; and your commitment to democracy, rule of law, and human rights. Our countries have both benefitted from this friendship and, I have no doubt, will continue to do so,” he said after presenting his credentials on Tuesday. “I have a tremendous amount of respect for Ambassador Anne Hall, the work she did here, and the high standard she set. I’m grateful for the strong team of Americans and Lithuanians at our embassy who show up every day, dedicated to ensuring our mutual security and prosperity.”

Ambassador Gilchrist was nominated by President Donald Trump last July and confirmed by the Senate in late December. During the next few weeks he has planned meetings with Lithuanian government officials, the diplomatic corps, members of civil society, NGOs and local entrepreneurs, as well as the 500 American soldiers who are deployed in Pabradė. “Now that my ambassadorship has officially started, I am very much looking forward to getting to know everyone personally.”

Ambassador Gilchrist is keen to discover Lithuania, its people and its regions. The ambassador has a passion for photography and will share his experiences in Lithuania on Instagram at @USAmbLT. He also intends to keep a beehive at his residence — a symbol of friendship between the two countries that is becoming a tradition for the U.S. ambassador. In his leisure time, the ambassador enjoys exercise, sports, travel and making ice cream.

Photo: Office of the President of the Republic of Lithuania/Robertas Dačkus.