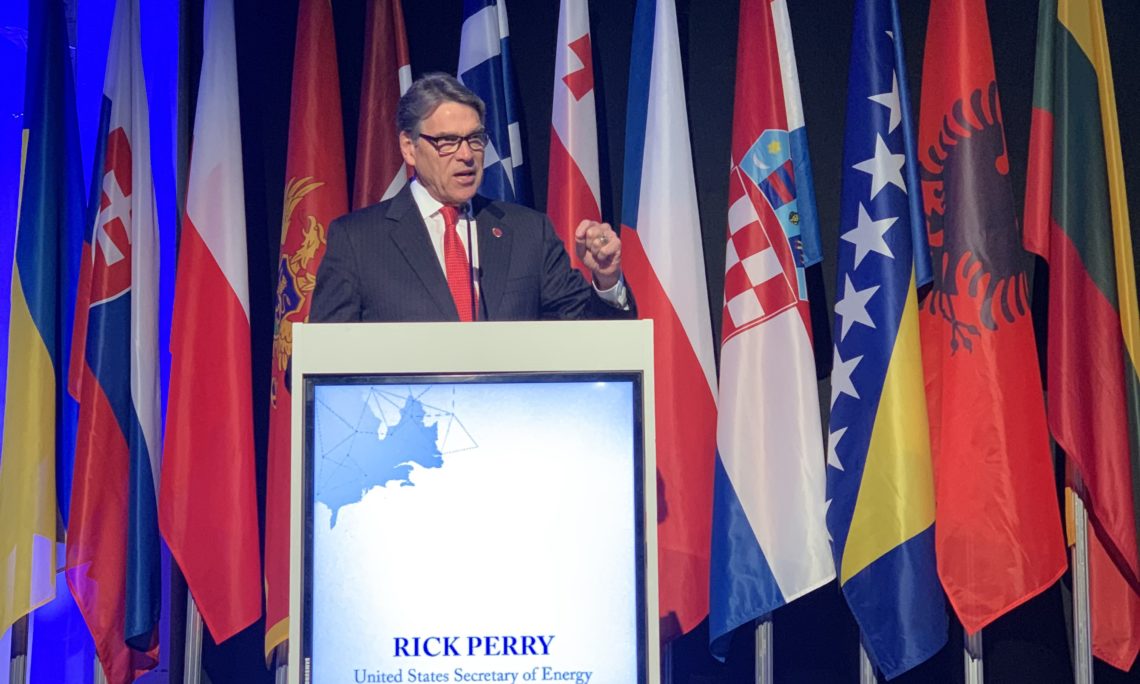 Thank you for that kind introduction.

It’s truly an honor and a privilege to be here in Vilnius…Lithuania…as we convene our second meeting of the Partnership for Transatlantic Energy Cooperation…or P-TEC…consisting of proud…free…and independent nations… across Central and Eastern Europe.

Most of these nations once suffered greatly…under Nazi and Soviet tyranny.

For you who represent those nations….you know as well as anyone… the precious value of sovereignty and liberty.

And you also know that a country’s sovereignty can be threatened even without overt aggression or occupation.

It can be threatened when its enemies exploit its vulnerabilities through coercion and manipulation.

And when it comes to energy security…that threat exists…right here…right now…on this Continent.

Now here’s what I mean:

But it also requires a diversity of supply… of countries providing that supply… and of routes to deliver that supply.

Many nations… lack energy security precisely because they lack this diversity.

They remain highly dependent upon a single supplier…the Russian Federation … for a single source of supply…natural gas.

On each occasion… Russia cut off or manipulated gas supplies to and through Poland and Ukraine… harming these countries as well as other European allies and friends.

And that is a key reason President Trump and I continue to oppose the Nord Stream 2 construction project…as well as a multi-lined TurkStream.

Nord Stream 2 is designed to drive a single-source gas artery deeply into Europe…and a stake through European stability and security.

It would increase Russia’s leverage over Europe’s foreign policy…and Europe’s vulnerability to a supply disruption.

Along with a TurkStream pipeline… it would enable Moscow to end gas transit through Ukraine by the close of the decade.

In other words… Nord Stream 2 would deliver stunning blows to Europe’s energy diversity and security.

It would transport a single source of supply…from a single country providing that supply …using a single route to deliver that supply… in a way that exploits dependent nations… bending them to Moscow’s will.

As much as anything else…it was the need for energy diversity and security…which led me last September at the Three Seas Summit in Bucharest to announce the creation of P-TEC…and it is one reason the Trump Administration stands firmly behind… the Three Seas Initiative.

The premise of P-TEC is simple:

By strengthening their own energy security…countries across this Continent…can bolster their national security…and further their economic security.

Speaking for my own country…we are ready…willing…and able…to help other nations increase that diversity…by expanding their energy choices.

As I’ve stated many times… through a cascade of innovative breakthroughs….the United States is producing energy more abundantly and more affordably…more cleanly and more efficiently…and from a wider range of sources… than anyone ever thought possible.

As a result…we now export our LNG to 36 countries on five continents…including Europe…which became the number-one destination for U.S. LNG during the first half of 2019.

And we are about to become a net energy exporter as well.

We offer unprecedented energy choices for the world…especially for our trading partners and allies.

For such countries…choice means this:

And so…we offer not just our LNG…but our civil nuclear capabilities and other technologies.

It means if they were bound to just one nation for those needs…they are bound no more.

And so…we offer ourselves as a competitive alternative to the Russian Federation.

It means that if they were compelled to depend on just one energy route for those needs…they are compelled no more.

And so… we support multiple routes to deliver energy across Europe.

Along with energy choice…we support free and open markets…the rule of law…and the sanctity of contracts.

We uphold the transparency of energy deals… we oppose using energy to coerce any country…and we remain a rock-solid…reliable supplier of every fuel we provide.

First…I’d like to announce our intent to form four key working groups among P-TEC member nations.

One group…will focus on energy efficiency and on renewables.

And let me add that on October 21… there will be an SMR conference in Brussels…and I hope that each delegation here will send high-level participants to attend.

And a final group… co-chaired by Lithuania…will seek to improve critical infrastructure protection….from enhancing cybersecurity to advancing efforts to synchronize with the European grid.

The need for a critical infrastructure group underscores the imperative of responding to a second Russian threat…a threat to energy reliability… in the form of Russian cyberattacks on the grids of other countries.

And that leads me to my second announcement ….

It stands for the Europe Technical Expert Advisory Mission.

With the help of Argonne National Laboratory in the United States…we’re preparing to deploy special teams to conduct assessments of the energy systems of you…our P-TEC partners… upon your request.

But I believe that as we work together…we can overcome them.

That is my vision…that is my country’s vision…and I know it is your vision as well.

So let’s reaffirm that vision today…for the sake of our nations… and for the benefit of people everywhere.