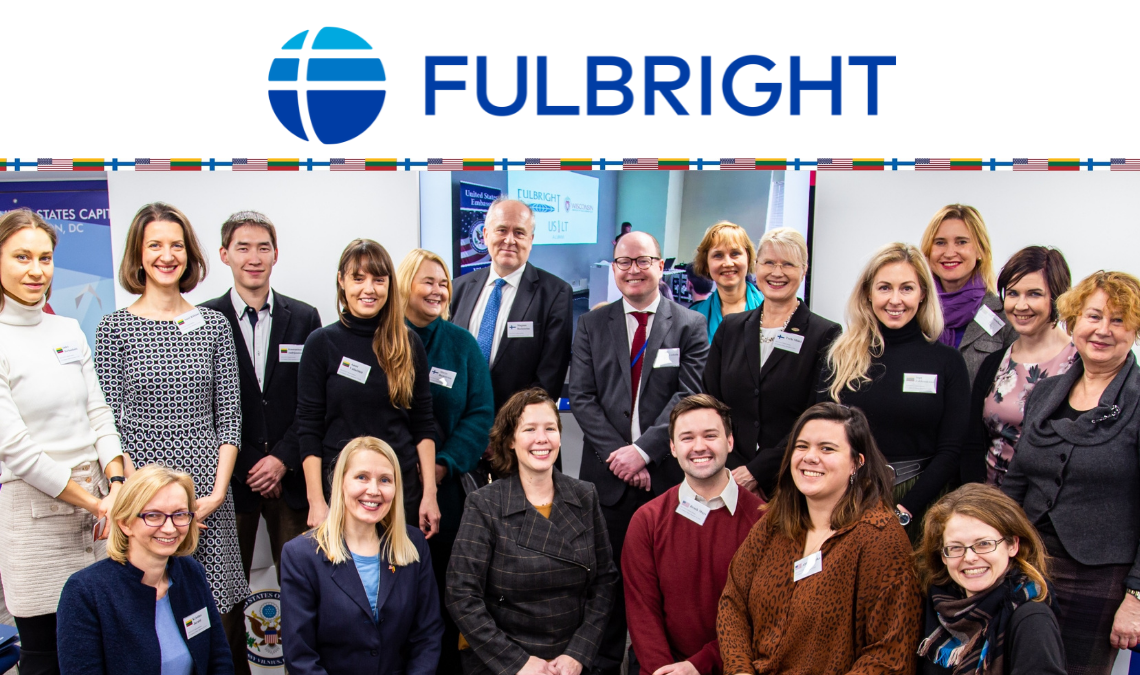 In 2021, Lithuania joins countries around the world in celebration of the 75th anniversary of the Fulbright Program.  On August 1, 1946, in the aftermath of World War II, President Harry S. Truman signed the Fulbright Act into law to establish the Fulbright Program, an international academic exchange program with an ambitious goal—to increase mutual understanding, and support friendly and peaceful relations between the people of the United States and the people of other countries. Since its inception, over 400,000 students, scholars, teachers, artists, and professionals from over 160 countries have participated in the Fulbright program.  Amongst the ranks of impressive Fulbright alumni are 39 heads of state, 60 Nobel prize laureates, and 89 Pulitzer prize recipients!

Lithuania joined the Fulbright Program in 1992.  To date, more than 500 Lithuanians and Americans have received the Fulbright scholarship (approximately valued between $20,000 and $100,000).  Their work covers the gamut from teaching English at Lithuanian high schools to advising students and conducting lectures, research, and studies in a broad range of fields at top-ranked higher education institutions around the United States and Lithuania.  In 2017, the Government of Lithuania signed a five-year Memorandum of Understanding making the financial commitment to support the international travel expenses of Lithuanian Fulbrighters.  The U.S. Embassy in Vilnius looks forward to expanding our cooperation with the Government of Lithuania in 2022 when we celebrate the 30th anniversary of U.S.-LT Fulbright exchanges!

Lithuanian and U.S. Fulbright recipients contribute to the deep academic, governmental, cultural, and personal ties that are the foundations of the U.S.-Lithuanian bilateral relationship.  Lithuanian Fulbright alumni have made enormous contributions to Lithuania’s educational institutions and society as a whole.  As prominent figures in education, science, arts, public health, law, and other fields, they are proof of the program’s success, durability and the strong bonds that tie our two nations together.  From 1996-2020, 13 Fulbright alumni have received 16 Lithuanian Science Awards, the highest and most prestigious award in Lithuania in the field of science, and 10 Lithuanian Fulbright alumni are recipients of the Lithuanian State Award, given to distinguished persons by the President of Lithuania.

“The Fulbright scholarship allowed me to learn from the best, to delve deeper into a fabulous world of contemporary American art, and to meet people whose ideas shaped my understanding of academic freedom, creative innovation, and to experience a unique American ambitious drive for excellence, which I admire and try to follow,” says Dr. Jurgita Staniškytė, Fulbright Student at Northwestern University, Evanston, 2000-2001.

“The knowledge and leadership skills I gained at Fletcher School of Law and Diplomacy (Tufts University) and John F. Kennedy School of Government at Harvard University were immensely valuable.  I’ve learned that consistent work and strong partnerships help to overcome most serious challenges,” reflects Rytis Paulauskas, Ambassador, Permanent Representative of Lithuania to the United Nations.

“The U.S. academic experience has been of fundamental importance for my professional development!  From public lectures at Columbia to research visits to Princeton, MIT, I have come to appreciate what truly socially responsible science and academic excellence stands for.  None of this would be possible without America’s deep-rooted estimation for human rights!” states Dr. Konstantinas Andrijauskas, Fulbright Visiting Scholar at Columbia University, 2016-2017.

“I have established many great relationships since my Fulbright Scholarship to Lithuania in 2002.  I have returned to your country seven times to teach and to receive an Honorary Doctorate from LKKA in 2007.” Dr. Donald A Neumann, Fulbright Scholar, Kaunas Medical University, 2002.

On the occasion of the 75th Anniversary of the Fulbright Program, the U.S. Embassy in Lithuania congratulates all Fulbright alumni in Lithuania and the United States on this important milestone of educational and cultural exchange.  The Fulbright program will continue to connect Lithuanian and American scholars and students for many years to come!