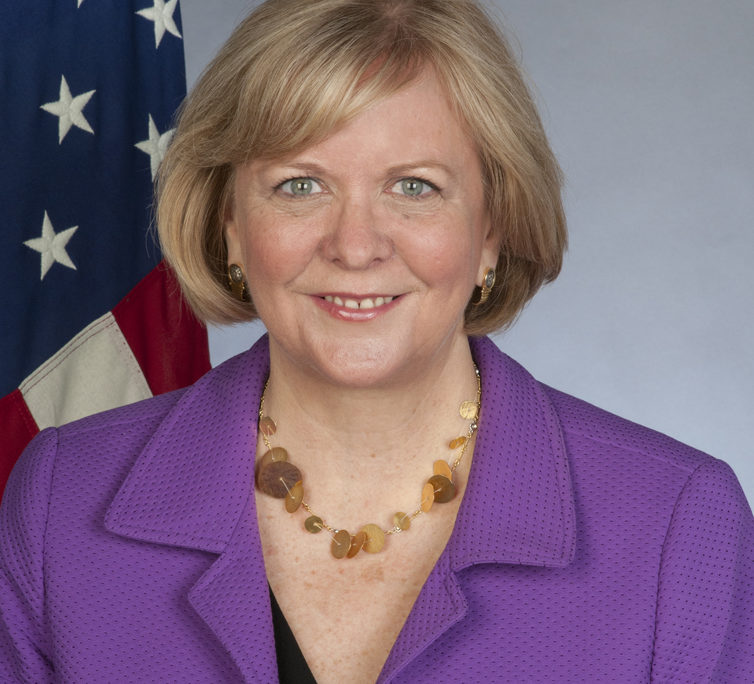 The U.S. Embassy is pleased to announce the arrival of Ambassador Anne Hall, the fourteenth U.S. Ambassador to Lithuania since diplomatic relations were established on July 28, 1922.  Ambassador Hall arrives as the U.S. Embassy marks the 25th anniversary of its opening in Vilnius on October 2, 1991.  She previously served in Vilnius as Deputy Chief of Mission from 2010 to 2013 and as Charge d ’Affairs for an extended period.

“I am humbled and honored by the trust and confidence President Obama and Secretary Kerry have placed in me,” said Ambassador Hall.  “The United States has long enjoyed a close relationship with Lithuania.  It is a relationship built on the bedrock of America’s steadfast refusal to recognize the incorporation of Lithuania into the Soviet Union and the partnership of the United States with an independent Lithuania in addressing today’s global challenges to democracy and security.  I look forward to building on this partnership.”

Ambassador Hall is expected to present her credentials to the President of Lithuania within her first two weeks in Vilnius.

Below is her full biography:

Anne Hall was confirmed by the United States Senate on July 14, 2016 as President Obama’s nominee for Ambassador to the Republic of Lithuania and sworn into office on September 16, 2016.  Most recently, Ms. Hall served as the Acting Principal Deputy Assistant Secretary of State for Oceans and International Environmental and Scientific Affairs.

A career member of the senior Foreign Service, class of Minister-Counselor, Ms. Hall has broad experience in Europe.  From August 2013 to July 2014 she served as Director of the Office of Central European Affairs in the Bureau of European and Eurasian Affairs.  In that capacity she was responsible for managing relations with Austria, Bulgaria, the Czech Republic, Hungary, Lichtenstein, Poland, Romania, Slovakia, Slovenia and Switzerland.  From 2010 to 2013 she served as Deputy Chief of Mission and an extended period as Charge d’Affaires at the American Embassy in Vilnius, Lithuania.  From 2006 to 2009 Ms. Hall was Principal Officer and Consul General of the American Consulate General in Krakow, Poland.

Ms. Hall also served as the Senior Cyprus Country Officer in the Office of Southern European Affairs from 2003 to 2005, participating in negotiations in support of a Cyprus settlement.  From 2001 to 2003 Ms. Hall served as the Country Officer for Norway and Denmark in the Office of Nordic and Baltic Affairs, during the lead-up to the Baltic States’ 2004 entry into NATO and the European Union.

She is the recipient of several Superior and Meritorious Honor Awards.  In July 2009 she became the first American Consul General to be awarded the Knight’s Cross of the Order of Merit of the Republic of Poland.  She speaks Lithuanian, Polish, Mandarin Chinese, Spanish and Portuguese.